“ReeFi gives you options. To be honest, I don’t know which direction I’d go if I had to choose between the Duo Extreme or multiple Unos. I like them both for different reasons. The Uno, at its killer price, gives the buyer more options. Want the light of two XR30 or two Skys? Buy three ($1,050) or four Unos ($1,400), get triple the warranty, and have great spectrum and PAR! The equivalent Radions and Sky’s would run ya $1,781 and $1,740 respectively (before the extra money for the hanging kits). Or you have the Duo Extreme at $650, shaming the big names in terms of spectrum, spread, PAR, price, and warranty. And a hanging kit.

Given further adoption, these fixtures disrupt. As I said, when I talk about expecting more for your money, this is it. An elite-level light at a price that makes sense. People like Daniel, and his team, deserve a look. They are giving us options that matter, and they’re respecting our money.” 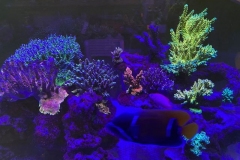 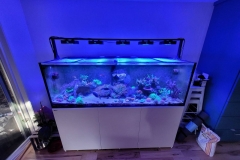 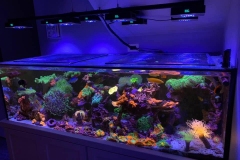 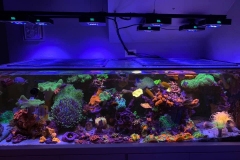 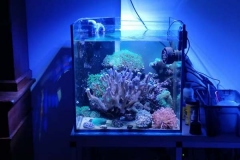 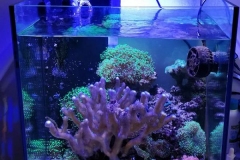 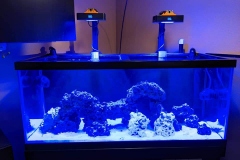 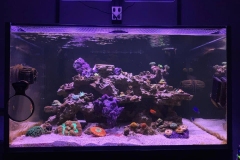 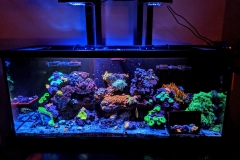 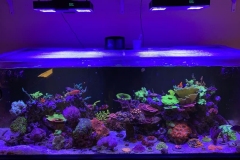 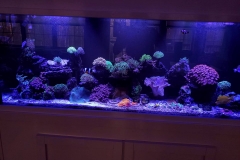 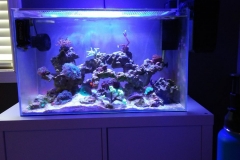 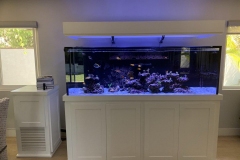 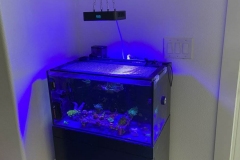 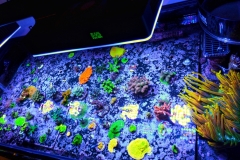 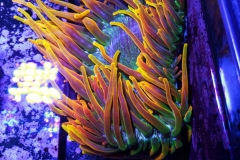 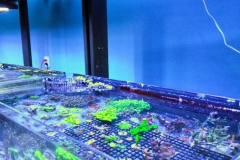 Went into the lab this morning and used an Ocean Optics spectrometer to analyze the ReeFi’s spectral qualities. I had some concerns that there was not enough green light that could be absorbed by the accessory pigment peridinin by analyses proved me wrong. The nine independent channels:
400 nm (actually peaking at 404nm, with about half of output in the UV-A range.)
420nm (actual peak at 422nm)
Violet (peaks at 426nm)
Royal Blue (peaks at 448nm)
Blue (peaks at 468nm)
Lime (broad spectrum peaking at 551nm)
Amber (peaks at 594nm)
Warm White (blue shoulder at 450nm and higher phosphor broadband radiation)
Cool White (blue shoulder at 444nm and higher phosphor broadband radiation)
The graph shows spectral quality of this luminaire with all 9 channels at full intensity. Maximum PPFD (or PAR if you will and measured by an Apogee MQ 510 meter) at the bottom of the tank was found to be 477 (some light reflected by the glass) and 1200 just under the water’s surface.
The tank is 24″ deep, so the sensor was ~23″ below the water line and ~26″ from the luminaire. 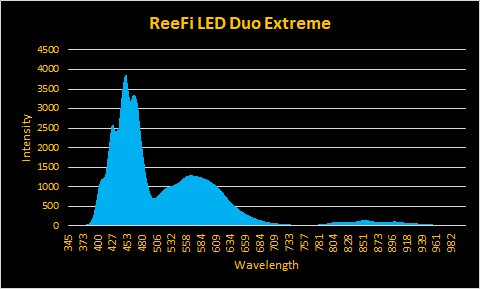 The first thing I noticed is how the ReeFi directs all the light straight into the tank without any side glare. It’s so much more pleasant to look at when sitting across the room from the tank. 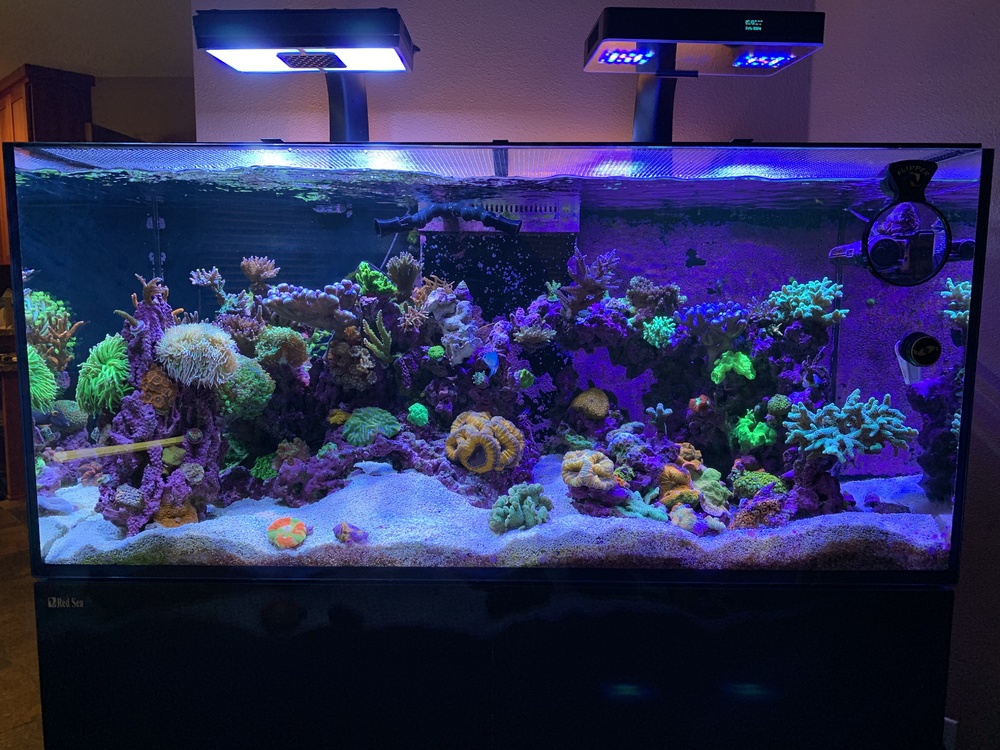 From a design standpoint, these lights are a work of art! They have a beautiful glass mirror finish on the bottom side and a sleek case. He designed an adapter to fit it perfectly to my Radion mount arm. 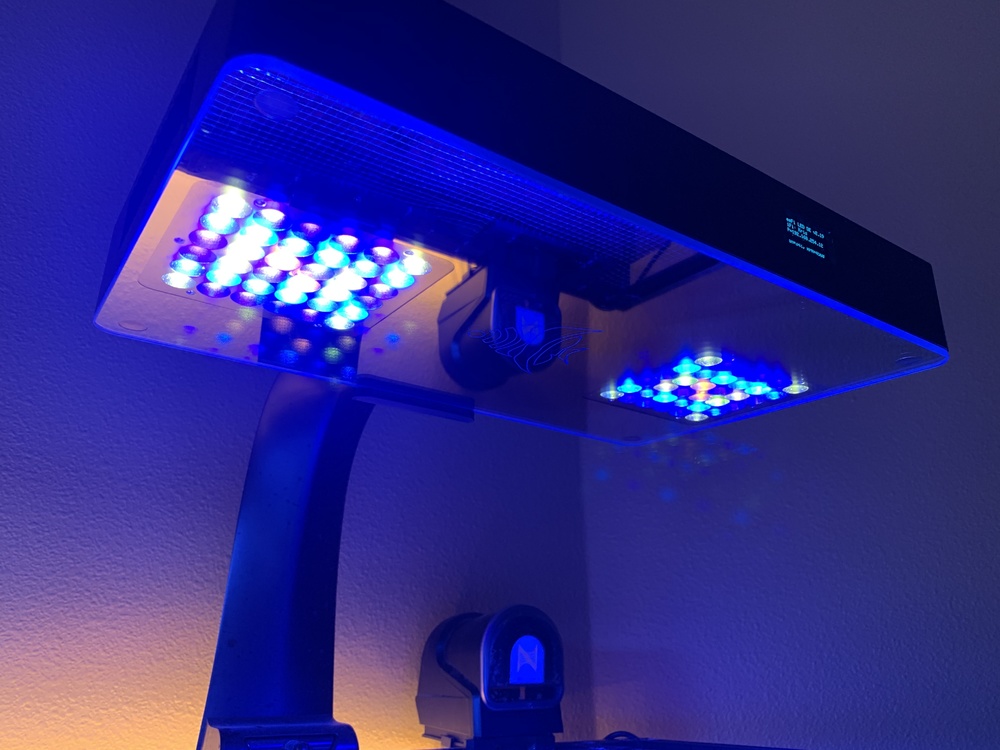 I set the spectrum and intensity to closely match my Radion, and I immediately noticed the ReeFi had less flicker/disco effect in the tank. PAR readings also showed the ReeFi was about 50 PAR higher both at the top and bottom of my tank than the Radion. I have not yet measured PAR at the maximum intensity, but we’ll probably do that during the demo at the Saturday meeting.

I woke up at 3am and couldn’t get back to sleep, so I got up and looked at my tank. Both my Radion and Daniel’s ReeFi were in moonlight mode, and again I was impressed with how little side glare comes from the ReeFi. The illumination of the corals looked about the same from both even though it hardly looks like his light is on: 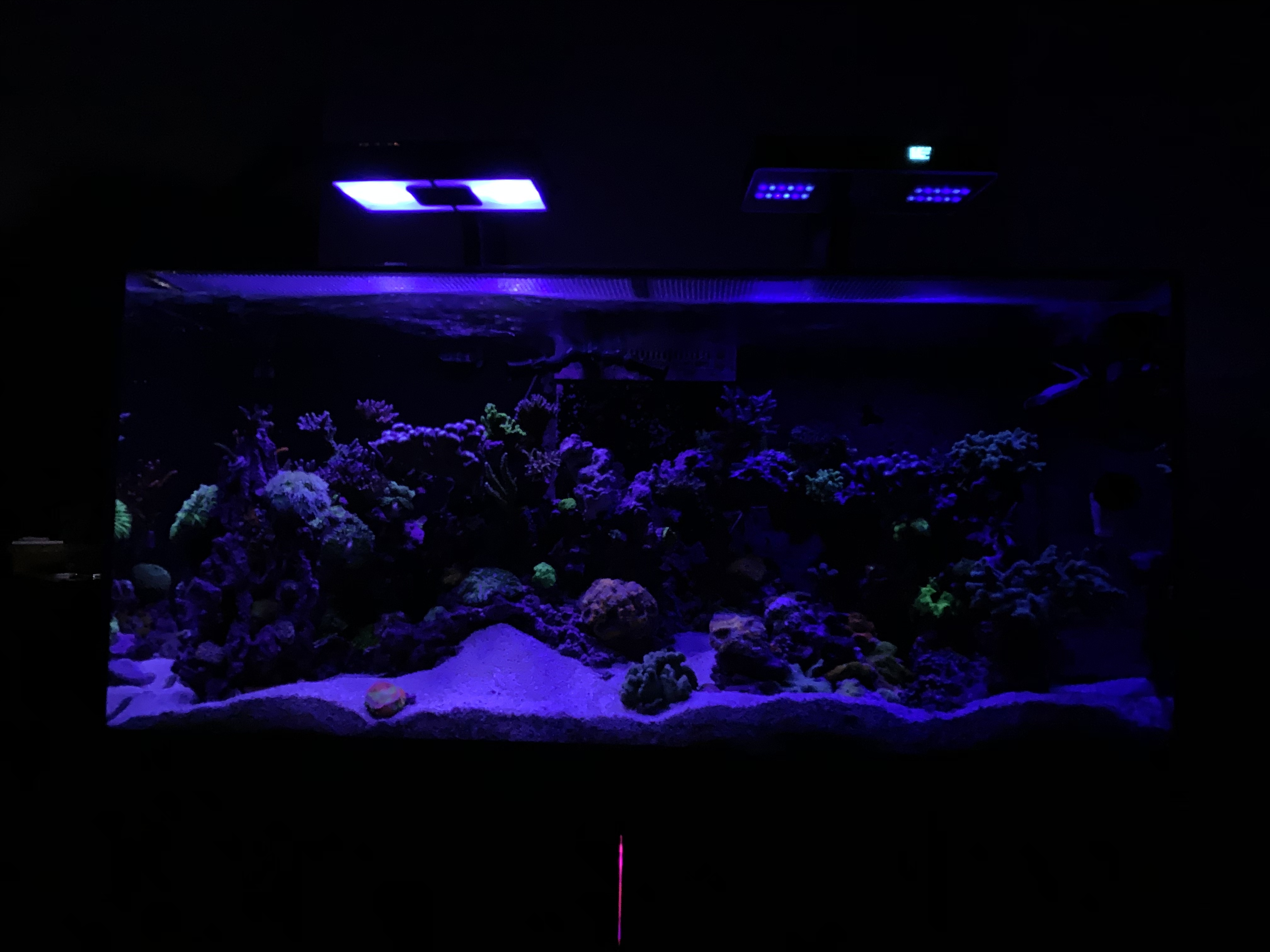 I’ve also got two of these lights, and I’ve had them for about 3 months, as the developer is local for me. When I first put them over my tank, all I could say was. WOW. The color is what really makes them stand out. The selling point for me on these lights is that every LED color can be controlled individually over 9 channels so you can fine tune your spectrum and get it exactly how you want it. I personally don’t like overly blue tanks or the disco ball effect, and was a T5 holdout for a long time for this reason. The developer of these lights consulted with Goldenbasketreef in Portland in designing them and you can tell by the quality of the full spectrum color you get from these lights. The color I get from them reminds me of Goldenbasket’s photos on Facebook. The web interface is solid and loaded with features, the reflectors do a good job of reducing lateral light spillage, and color blending is really good—no disco ball effect. Importantly, my SPS are growing very well under them. Here’s a shot of the ReeFis over my frag tank. As you can see by how far up I am hanging them, they are very powerful. I am slowly moving them down on the chains, as my corals adjust, until they are about 12 inches from the water surface. 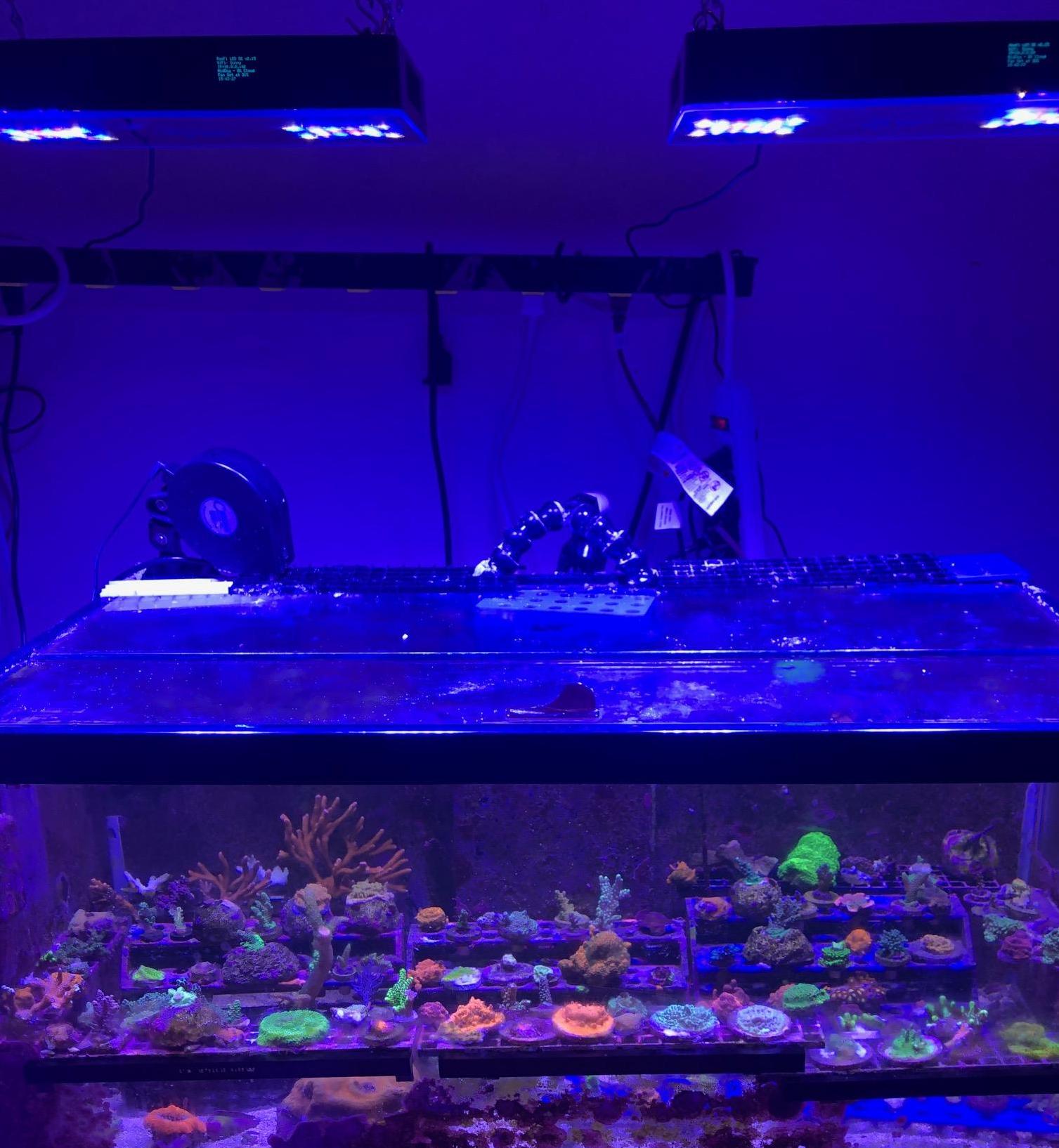 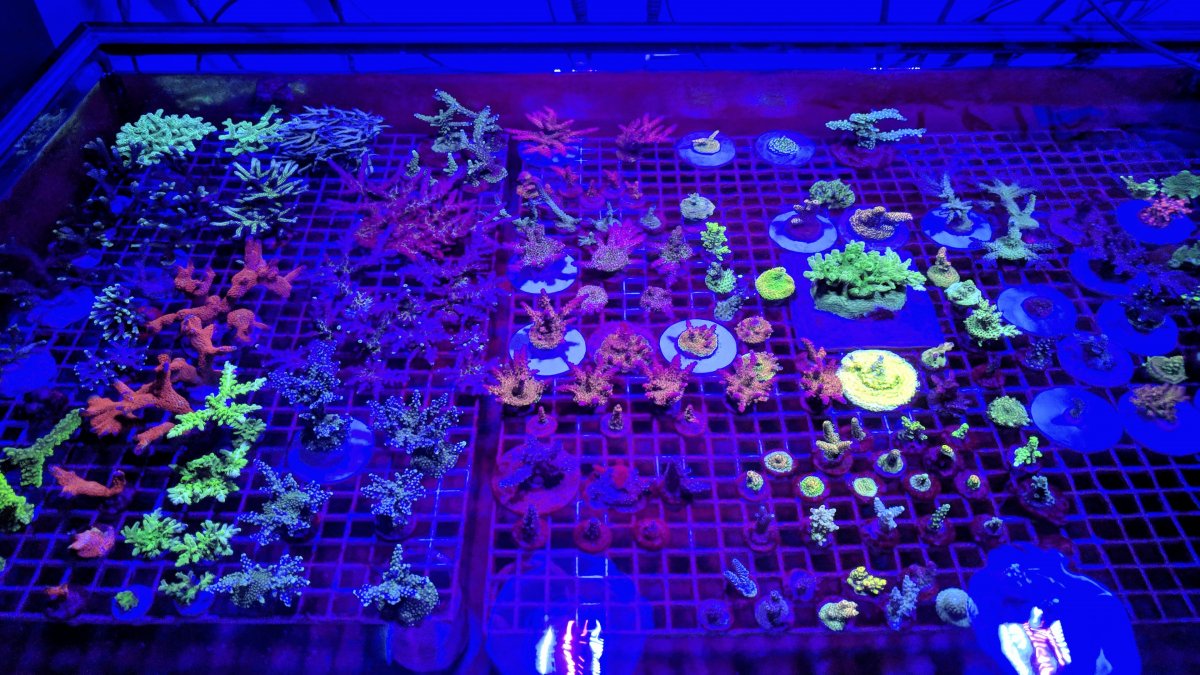 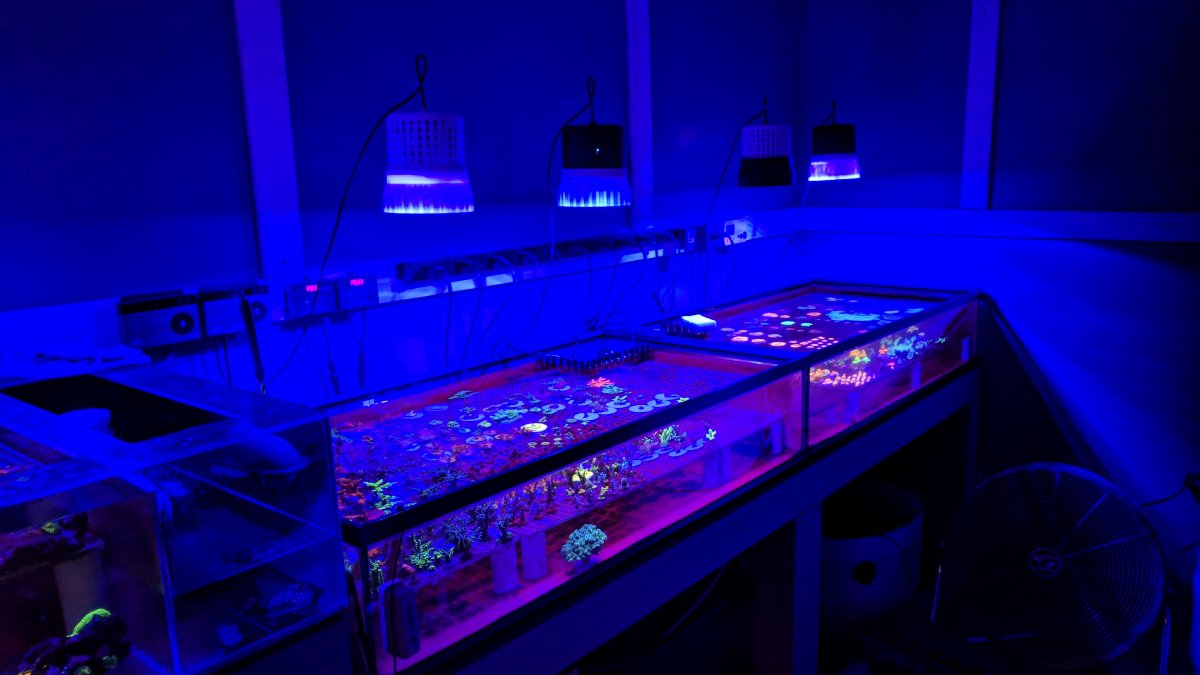 I have been reefing since ’98 and have witnessed many improvements and trends. I am not prone to taking risks with my progressive reef. So it is no surprise that it has taken me two years to decide on the light upgrade for my dense mixed reef.

Daniel Lu presented a live demo of ReeFi lamps whereby, meeting all my requirements. In addition, he implemented further improvements of the UI including noise reduction. I can say these are light weight and reasonably quiet.
There are 6 over my 250DD 60″x36x27 for extreme coverage. I find them very powerful and deep penetrating shimmer. Wide 4″ crossbar? No cast shadow when positioned properly. I have them mounted in a elevating canopy 18″ above glass tops. I chose the Reefi to replace my 4 Helios 180w+t5. Excellent customer service, even video-chat of set up too. 36″x36″ coverage is fantastic, similar to 150w light cannons. Im loving the customizable channels that include the 395UV. Its the one spectrum missing in most sets with the exception of 400w halides, at this intensity and gets SPS to regain the sunbeam fluorescing I lost 4yrs ago when I removed my Radiums. I have been increasing my perimeter Reefi power to 50% and lowering the center lamps to 40%, due to a LPS maze brain top burn that is 14″ deep on the reef. All others are having daytime PE and measurable growth within the 3weeks ReeFi has been running. And as advertised, the lamps quickly recovered their sync several times during storm power-loss. Firmware wireless updates are easiest yet compared to other brands, just select IP lamp and update. I love the temporary set feature for trying new looks and showing off these settings that revert after 30min to resume schedule. Or “apply” to keep new setting. Simple UI select and drag, no laborious written code sequences. Any mobile wifi device can sync to the IP Reefi, alike high end DSLRs. Just, well thought out conveniences by a Programmer turned Reef Aficionado. I look forward to replacing my FOWLER black boxes shortly.